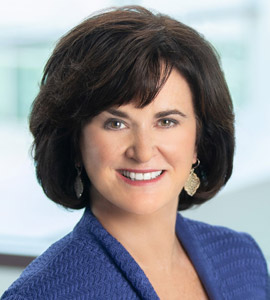 Although most Americans alive today have never known a world where women are absent from the workforce, most are still well aware of the discrimination and injustice that continues to plague working women. Though gender norms continue to be broken across different occupations or companies once considered off-limits to women, significant challenges remain. Even in “female-dominated” industries like healthcare, education and real estate, around one-third of Americans attest that a “glass ceiling” remains in place, and few women are ever promoted to leadership positions, according to a recent survey conducted by Coldwell Banker.

Chris Boyle, chief client officer at Freddie Mac, knows this problem all too well. Having risen through the mortgage industry’s ranks throughout her decades-long career, she became familiar with the uneasy feeling of being the only woman in the room during executive meetings. That spurred her to head an initiative to boost the number of women holding executive and senior-level positions within the organization, as well as connect those women to aspiring leaders still climbing up the corporate ladder through a mentorship program.

Called #LeadingTheWay, the initiative is intended to spread throughout the real estate and financial services industry — and ideally everywhere — and help bring more women into the boardrooms and C-suites of America. “We wanted to create a network of women to support our individual growth, but we also wanted to provide a framework for others as they build out their own careers,” Boyle said. “It’s a campaign focusing on women in the housing industry, but it’s really applicable to every industry.”

Having worked in the mortgage industry for the last 30 years, Boyle said she’s seen dramatic change in the number of women in this traditionally male-dominated sector. Still, female executives are vastly outnumbered by their male counterparts, and recent surveys have found most corporate leaders don’t think this long-standing gender dynamic will change anytime soon.

While she may be the exception to that trend, Boyle said it was clear from early in her career that other women were routinely being locked out of leadership opportunities. She saw this as a manifestation of subtle yet ingrained ways of thinking about gender in the workplace.

“I am often asked, ‘who was your champion? What was her name?’ Really, my role model for success was often a man,” Boyle said. “Women weren’t trained in the same way as men. They weren’t afforded the same chances to succeed.”

That’s part of what motivated her to increase the visibility of women in leadership roles, who could serve as champions for the next generation. At Freddie Mac, Boyle helped create the Women’s Interactive Network, a piece of the #LeadingTheWay initiative that connects up-and-coming women in the organization with senior executives to foster mentorships. Today, women hold a number of roles in Freddie Mac’s C-suite as well as in senior vice president positions.

Boyle also hopes her efforts can reshape how both men and women think of their jobs. “#LeadingTheWay focuses on gender diversity, but it’s about diversity in all its forms,” Boyle said. With her initiatives within Freddie Mac, she hopes to break down gender conventions from both sides — demonstrating that a woman can be CEO just as a man can be a family’s primary caretaker, for example. But this also requires a deeper understanding of diversity, Boyle said. It means advocating for a broad mix of personalities at work, whether that means pairing introverts with extraverts, or creative minds with analytical thinkers.

“The business world has changed dramatically over the last 30 years,” Boyle said. “It’s evolved for women, and it’s happened with men supporting that evolution as well.”

Boyle hopes her #LeadingTheWay initiative can find a home even in less conventionally structured professional environments. Because the majority of real estate agents working today are women (63 percent of National Association of Realtors members), Boyle sees the industry as a model for advancing women as professional leaders.

“Realtors are really the tip of the spear” in the housing industry, Boyle said. “They are selling the homes and acting as that trusted advisor to clients. They’ve made a tremendous contribution in leadership and knowledge. At Freddie Mac, we want to work with them to understand who the homebuyers of the future are, as well as what we can do to ensure no one is left out personally or professionally.”

Equality in the workplace requires flexibility and a commitment to a healthy work-life balance. Boyle noted that this is one reason why women traditionally flocked to real estate careers where 9-to-5 work hours weren’t the norm, leaving more time to raise a family. But more financial services companies are embracing that greater degree of flexibility too, although much is still left to be done across the professional landscape.

“I’ve had the good fortune to enter the workplace with a lot of confidence and few biases,” Boyle said. “I’m hoping to use this campaign as a stepping stone, to use Freddie Mac’s success to make change in the industry.”